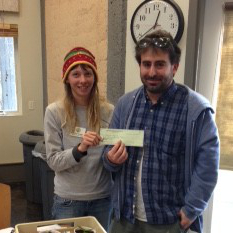 Education is one of CRFG’s cornerstones.  Originally interpreted as educating the general public, it has over the years centered on the education of young people interested in growing rare and unusual fruits.  Orange County and Central Coast chapters led the way by  associating themselves with the two Cal Poly campuses and offering scholarships;  but other chapters soon followed suit in their own way.   LA Chapter has aligned itself with the one high school in the San Fernando Valley that teaches agriculture, and the grafting programs of both Central Coast and LA Chapters reach out to HS students to encourage interest in growing rare fruits.  The Redwood Empire chapter is especially active in this regard and proudly supports groups such as Slow Food, CropMobster, Sonoma State University, The Heirloom Expo, Farm to Pantry Gleaners, Gravenstein Apple Fair and The Original Farmers’ Market.  In addition, each year they vote to support a number of initiatives including scholarships to individuals and grants to local schools.  Both San Diego and North San Diego chapters currently work with local community colleges.
CRFG, Inc., itself, entered that arena with the Scholarship Committee, an offshoot of the Development Fund, which has awarded from one to four scholarships each year for many years.
By Ronni Kern, 2 years1 year ago